Hydroponics: From your roof to your kitchen 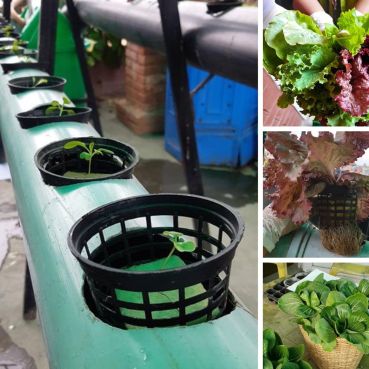 Think of the most essential elements needed to grow a plant: sunlight, water, air, and soil. Now imagine, growing a plant without soil. At first, a plant growing in a soilless culture might seem ridiculous, but that is where Hydroponics comes in. Hydroponics is made up of two Greek words, “Hydro” meaning water and “Ponos” meaning work or labor; simply, Hydroponics means “water working” and is a method of growing plants in water. Although it might sound complicated, through various research and attempts, modern hydroponics has evolved from large scale systems for commercial purposes to simple systems that people can install in their houses. Hydroponics farms have been gaining popularity globally as it has presented itself as a solution for problems such as wastewater treatment, food scarcity, lack of irrigation water, and farmland.

Depending on the type of plants, water supply, area, and other various factors there are different kinds of hydroponic systems. Some common hydroponics systems are; wick system, ebb and flow, drip system, and the one we will be discussing in this article, the nutrient flow technique (NFT). NFT is a simple system design in which all the necessary nutrients for the plants are added to the water in solution form. The roots of the plants absorb the nutrients when they come in contact with the water that is constantly flowing. The NFT system has gone through many modifications to tackle issues related to oxygen deficiency, ethylene buildup, and entanglement of roots from plants being placed too close in the system. NFT is often used to grow plants that are small and have a short growth period. Some crops that thrive in an NFT hydroponics system are lettuce, bok choy, strawberry, and some herbs such as basil, rosemary, etc. NFT systems have been used from small scale DIY household systems to commercial systems growing several thousand plants at a time.

Simpler to work with than the rest of the hydroponic systems, research has proven various advantages of the NFT hydroponic system including low water and nutrient consumption. The regular flow of water and nutrient solution assures that the plant gets the optimum amount of nutrients required for its healthy growth. In comparison to other systems, it is easier to disinfect the roots and hardware of the NFT system.  Moreover, since it does not require a growth medium it is convenient to inspect the roots for any sign of diseases. The recirculation of water assures that there is minimal groundwater contamination, and a single pump or relatively less amount of water can be used for a large yield. The regular circulation also reduces the need for continuous aeration of the nutrient reservoir. Due to the regular feeding to the plants, a uniform pH is balanced throughout the system which helps in avoiding localized salt build-up in the roots. Since an NFT hydroponic system can be built even at home, it is inexpensive and is easily adaptable to plant types, climate, and plant requirements.

In the contemporary context, one of the most important advantages and application of an NFT system is in wastewater treatment.  There have been multiple successful attempts in treating domestic, livestock, municipal, and industrial wastewater through the NFT system. While hydroponic systems have been used to treat wastewater and cultivate ornamental plants such as roses, the wastewater treatment has also been successfully tested on fruit-bearing plants. An evaluation of various hydroponic techniques as decentralized wastewater treatment and reuse systems showed that the crop yield for plants such as winter squash, sweet corn, eggplants, and cherry tomatoes was more than double that is obtained through traditional agriculture. This testing was done over a period of three years with more than 10 varieties of plants including flowers, vegetables, and herbs. Although there are numerous advantages and benefits of a hydroponic NFT system one of the downsides of it is that an NFT system does not work for plants with long taproots. It also does not work for plants that need a lot of support from the use of growing mediums.

The simple yet efficient design of an NFT system allows families to grow their own vegetables like lettuce, spinach, and tomato in their houses. The Netherlands, despite its size, is one of the leading food producers of the world due to its use of hydroponics systems, and Nepalese could use this system to grow plants in their own houses. The NFT system is apt for the moderate climate in Nepal and the plants suited for the system can be grown in household levels without the construction of a greenhouse. The hydroponic NFT system built and used at WindPower Nepal comprises of PVC pipes. PVC pipes are relatively inexpensive material which allows the system to be affordable for Nepali households. Through different trials, narrower pipes have been used to grow vegetables, such as lettuce and bok choy, and the problem of inadequate oxygen in narrow pipes is avoided by the regular circulation of water with nutrient solution. The system is capable of growing 120 plants in PVC channels of diameter 2.5 inches. This system uses 15 liters of water mixed with premade nutrient stock. This particular system is not just cost-effective but also saves space and water. While hydroponic systems might seem like a new and bizarre idea to Nepali households, this simple NFT hydroponic system is a convenient and efficient system that individuals and families can install in their houses to grow their own vegetables and fruits. Allowing households to grow their own food without compromising the quality and nutritional values, WindPower Nepal’s NFT system addresses growing concerns that individuals nowadays have regarding the quality of food production while also being affordable and efficient.