Why we need to harness renewable potentials in Nepal 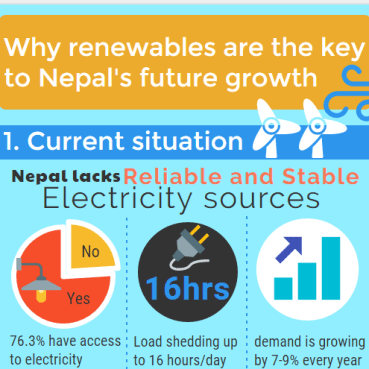 When I arrived at the Tribhuvan International Airport in Kathmandu, Nepal at night in June, I was happy to see some city lights from the airplane . I was worried that the city would be completely dark without people having access to electricity. It was difficult to gain up-to-date information about situations in Nepal especially after the earthquake and to imagine what it is like for locals to live in Nepal.

Hydro Reliance
Nepal is always short of electricity supply with its demand growing by 7-9% every year. Why do we not have enough electricity supply? On-grid national electricity, where I think the electricity comes from, relies almost entirely on hydropower as a source. Nepal is the 2nd richest country in inland water resources with as many as 6000 rivers, rivulets and tributaries, and if fully exploited, Nepal can meet its own electricity demand as well as exporting to neighboring countries such as Bangladesh and India (IFC, 2014). The theoretical potential is 83.290 MW; of 45,610 MW is technically feasible; however, currently installed capacity on grid is 718.62 MW (NEEP, 2014). Further, hydroelectric projects in Nepal are run-of-the-river types that do not have water storage and subject to seasonal fluctuations (HIDCL). Therefore, more energy is available during monsoon season from June to September, and less in dry season or the rest of the year.

Load Shedding
As a result, Nepal Electricity Authority (NEA) has been carrying out so-called load shedding or planned power cuts all year round. How’s that work? The whole Nepal is divided into different groups and each group is assigned a set weekly schedule. Right now, load shedding is conducted twice a day, lasting in total of 6-8 hours per day. The situation is better in monsoon season and worse in dry season. How do Nepalese cope with power cuts? Many households and businesses have a backup system, usually diesel generators. However, when border blockades happened due to political situations last year, all the imports from India, the largest trading partner for Nepal, stopped coming in. As a result, fuel was short and its prices skyrocketed. Rising prices disproportionately affects the poor, or they do not even have a backup and simply go dark.

Rural Access
According to the World Bank, 76.3% of the population had access to electricity in 2012 in Nepal. In reality, the rate is higher in urban areas and lower in rural areas. For those who are not connected to the grid, fuelwood is the primary energy source used for cooking and heating (NEEP, 2014). Since there is no grid connection and fuel is subject to price variations, it makes sense to employ cheap, locally available traditional sources such as fuelwood (FAO, 1983). However, it has obvious downsides such as indoor air pollution and the time spent gathering fuel wood that can be spent on schooling and other productive tasks (K.C. et al, 2011). Even in Kathmandu, I see people grilling corn on the street on a charcoal, causing smokes and emissions.

Renewable Potential
In order to manage a stable supply, Nepal needs to graduate from hydro dependence and achieve a healthy energy mix employing different renewable electrification methods on grid. Thanks to its topography, Nepal has a huge potential for renewables other than hydroelectricity, and renewables have been utilized as off-grid projects in rural areas taking advantage of natural resources (K.C. et al). For example, K.C. et al. states the potential for solar power is estimated to amount 2064 million tons of oil equivalent (Mtoe) per year, and the potential for wind power is 3000 MW. Grid electricity will benefit from having multiple sources by leveling the supply throughout the year, and renewable projects would also provide jobs for the country where more than 1,500 young people leave for job opportunities abroad every day.

Reliable and Clean
Although Nepal’s projected emission up to 2030 is in the sufficient range with less than 0.1% of the global total, the Himalayan nation is highly vulnerable to climate change impacts (Climate Action Tracker, 2015). Renewables provide clean, sustainable energy sources that do not accelerate climate change, and utilizing a number of different renewable energy sources means that Nepal would achieve a healthy energy mix that is not dependent on a single source. Likewise, adopting different electricity sources at a household level such as grid, solar, wind, diesel and storage enables constant electricity supply all day. Finally, the cost of renewable energy beats the price of fossil fuels. The maintenance cost is also minimal; for example, 2-3 times a year’s checkup is sufficient for wind turbines (NextEra Energy, 2016).

Sustainable Development Goals (SDGs)
Working here made me realize about the things I took for granted. For example, there’s a suitable site for wind farm installations in Nepal (Mustang), but there was no road going there. Now there is, but it is not wide enough to transport generated energy to the other parts of the nation, and is unusable during monsoon season. Likewise, I read a business feasibility report concluding that the project would not make sense as imported raw materials are too expensive and cost more than the revenue. A lack of basic infrastructure affects all the other sectors.
Energy is essential to basic services and economic activities such as education, medicine, business, and can also be a bottleneck for other development efforts carried out here in Nepal. That is why affordable, sustainable and clean energy is listed as one of the Sustainable Development Goals (UNDP, 2016). We need a stable, reliable, sustainable, efficient and affordable energy in Nepal, and that can only be done by incorporating renewables into the energy mix.

In order for Nepal to achieve sustainable development, renewable energy is a must.

The World Bank. “Sustainable Energy for All.” 9 September. 2015. Retrieved from http://databank.worldbank.org/data/reports.aspx?source=sustainable-energy-for-all. Accessed  27 July. 2016.