Why should Mustang give wind energy a second chance? 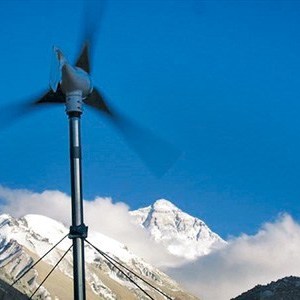 With the lack of wind assessment and successful precedent cases, Nepal is reluctant to invest in new wind generation projects wasting all the wind potential hidden in the Himalayan Mountains. Considering the rate of development of the technology and new community business models in the rural and remote areas it is high time to give wind energy a second chance.

Approximately 76% of the Nepalese population has access to electricity with disparities between urban and rural areas. Despite experiencing an outstanding growth in rural access increasing from 12% in 1990 to 70% in 2012 many technical and institutional challenges are yet to be addressed. First of all when talking about “access” in the case of Nepal, one cannot have in mind a constant and reliable source of electricity. Nepal is the country with the second richest inland water resources which to some extent justifies their energy market fully depending on only one source of energy- hydropower . On the other hand, 99.7% of the energy being generated through hydropower makes the energy market highly vulnerable to seasonal fluctuations and leads to load shedding. Planned power cuts are a result of water resource fluctuation where approximately 80% of precipitation occurs during the monsoon season as well as technical design of power plants with only run-of-the- river types without storage facilities （Central Bureau of Statistics，2014） （The World Bank. All these factors are resulting in planned power cuts of around 6 to 8 hours per day during the monsoon season and up to even 18 hours per day during the dry winter time.

Another challenge that Nepal has to face is a rapid population growth leading to increased energy demand of approximately 7% to 9% every year. Population growth is not distributed equally with an increasing percentage of urban inhabitants and shrinking population in rural districts. One of the main reason of migrations from rural to urban areas is lack of energy during the dry season when the hydro plants are freezing due to harsh Himalayan climate. Despite all these factors, almost all the financial support for renewable energy projects is distributed to new hydropower plant investments.

Moreover, in case seasonal fluctuation, load shedding and winter migration of rural inhabitants might discourage new investors, financial support provided by the government surely prevents hydro technology from being forgotten by prioritizing it with highest subsidy rates and giving it inclusive feed-in- tariffs scheme which no other technology can obtain. Assembling all the pieces together, it is clear that there is something missing, something simply called wind power generation.

Nepal is a country located mainly in high mountains, de facto highest in the world which contributes to a great wind potential estimated to be around 3,000 MW with an average wind speed reaching 25 m/s and gust storms embracing up to approximately 46 m/s.  Unfortunately with lack of adequate database and realistic wind assessments which have not been conducted yet all the wind potential is still preserved in the hands of Mother Nature. （Shakya ，n.d.）The situation of wind is about to change with currently ongoing Nepal Wind Mapping Project conducted by the cooperation of Windpower Nepal, Technical University of Denmark (DTU) and a Belgian company 3E （WindPower Nepal Pvt. Ltd.）and new proposal of implementing wind generation system in the district of Mustang which is famous for its stable and strong wind speeds throughout the year.

District of Mustang is located in the trans- Himalayan region situated between two 8,000 meter peaks: Annapurna and Dhaulagiri, forming the deepest valley in the world: Kali Gandaki River. The unique orographic conditions create extreme diurnal wind patterns with reliable recurring wind speeds rising up in the morning and reaching the peak at around 2 pm .  Thanks to its unique features district of Mustang was the location of the first wind turbine project tested in 1987 under the supervision of the Danish Government. The project successfully generated electricity in the Kagbeni village located in the central part of the valley through two 10 kW generators but due to severe gusts the turbines were blown away resulting in the negative attitude towards this technology. Until today no real effort was made to restore the plant in Kagbeni, but with a better understanding of wind energy technologies implementation of new wind turbine projects is likely to succeed.  Wind turbine system with battery storage would provide inhabitants with reliable source of energy and a business model that allows local cooperation can also ensure a long-term partnership between private sector and the community.

Community Rural Electrification Program was launched in 2003 by the Government of Nepal to increase electrification rate in rural areas which allowed organized rural communities to buy electricity in bulk and retail it to local users. This program allows communities, Nepal Electricity Authority (NEA) and private companies to form a public-private partnership, splitting the cost and responsibilities. The main feature of the model is establishment of the Village Cooperation which is a local energy authority responsible for charging customers with initial connection fees, managing daily operations and holding monthly meetings. Cooperation is  the owner of the local distribution system but in return has to contribute minimum 20% of grid connection costs in the form  of labor, household donations or bank loans （P. R. Krithika，2013） （The National Association of Community Electricity Users-Nepal）.

This model benefits all the actors involved. From the companies perspective it unburdens them from obligations to provide all the investment costs. Moreover, by implementing this model, cooperating with local communities and eventually transferring ownership of the distribution system to the local cooperation financial support in the form of subsidies can be obtained from the government, covering around 40% of investment costs.（Ministry of Population and Environment ，2016 ） Second, the community receives technical workshops and trainings carried out by the company so that the obligations associated with the distribution system are fulfilled. The project also creates job opportunities for the locals and by allowing communities to be one of the projects’ shareholders ensures trust and commitment so that theft can be prevented. Third, national authorities meet their goals of extending electrification in the remote areas and hence increase social development of rural inhabitants

Looking at the current situation of wind generation investments which are barely included in the national renewable energy strategies, untapped wind potential and new institutional set ups for community electrification a clear gap between these factors can be seen. In order to feel the missing space new policy arrangements for wind energy have to be implemented. What is even more important, social attitude towards wind technology has to be changed and there is no better way to do so that implementing a successful and affordable wind project in the district of Mustang involving public engagement.