Talking about the wind 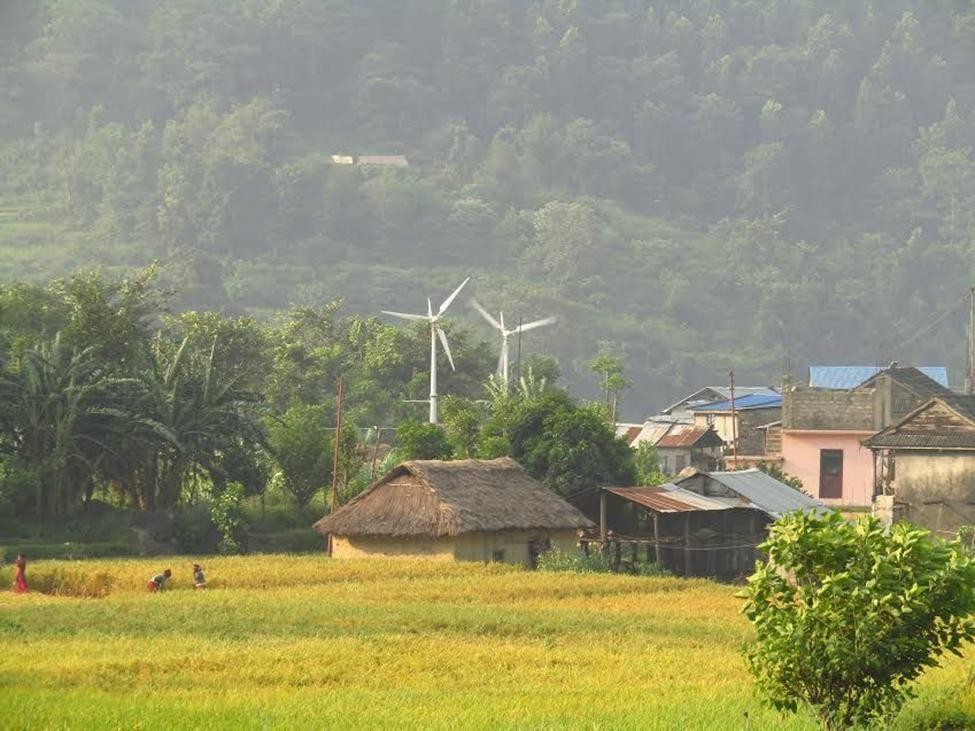 Nepal’s energy mix, currently dominated by hydropower, is expected to be more diverse in the coming years with developers showing interest in renewable energy projects. Nationally Determined Contribution has set a goal to expand clean energy generation from approximately 1,400 to 15,000 megawatts, of which 5-10 percent will be generated from mini and micro-hydropower, solar, wind and bio-energy by 2030. Out of this, 5,000 megawatts is an unconditional target, and wind energy may be a viable option to meet this goal. The wind mapping data from the World Bank Group shows that Nepal has a very good potential for wind energy generation, but not much has been done on this front so far. A few small-scale wind turbines set up in various parts of the country have become a viable option for those areas not connected to the national grid.

New energy science and technology breakthroughs could cut the cost of wind energy by half by 2030, making it fully competitive, and thus wind turbines are getting cheaper, bigger and better. Till now, a total of 24,105 megawatt-hours (MWh) of electrical energy is available through the Integrated National Power System, out of which 22 percent is generated by Nepal Electricity Authority (NEA) plants, 40 percent is generated by independent power producers, and 38 percent is imported from India.

In order to make Nepal self-reliant in energy production, there is a huge opportunity for the government and independent power producers to develop and invest in this sector. According to a Solar and Wind Energy Resource Assessment report, about 3,000 megawatts can be generated from wind energy only which is far greater than Nepal’s electricity demand. For a country like Nepal where national grid extension to all rural communities is a challenge, clean and modern electricity service through wind and solar/wind hybrid systems is expected to be the most viable option. Since there is no need for high wind speed for small wind turbines, small systems with a capacity of less than 400 watts can be installed to electrify rural areas without long-term data.

The Alternative Energy Promotion Centre has been successfully implementing wind and solar/wind hybrid systems under the public-private partnership model for the electrification of off-grid communities. As per policy, the wind and solar/wind hybrid mini-grid projects will be eligible for subsidies if the sites are not accessible to the national grid and no other means of electrification exist.

Also, policy for the integration of wind and solar photovoltaic energy into the national grid power system through net metering has already been formulated by the government. This will have a positive impact on reducing the NEA’s distribution losses in the selected distribution centres. For wind power, the levelised cost of energy was calculated for three sites and it was found to be Rs7.95 per kilowatt-hour which will decrease in the future. The government has also provisioned for viability gap funding which will be utilised to fill the gap between the posted power purchase rate and the competitive rate quoted by power developers. Nepal’s wind energy has ways to go to achieve its vision of higher grid penetration and transition to a low-carbon economy.

Despite the huge potential, there are a few challenges for the development of wind energy in Nepal. The main challenge is the transportation of large turbines over challenging topography to reach areas with high potential. The country has a limited number of data measurement stations, and adequate research has not been carried out to determine the feasibility of wind power generation and its potential contribution in Nepal’s energy supply. Land acquisition for electricity projects, transmission lines and substations is very difficult and costly. Approval for environmental impact assessment or initial environmental examination takes up to two years.

The power purchase agreement requires developers to build their own power evacuation/transmission lines, which have to be handed over to the government after the licence period. Such policies discourage independent power producers from investing in wind energy. Policy uncertainty about grid expansion, poor access to credit and absence of formal financial institutions at the local level also discourage private entrepreneurs from venturing into the sector. There is no integrated energy policy covering all kinds of energy resources.

Applicable solutions should be explored to boost wind energy in Nepal’s energy mix. Since the country has a limited number of data measurement stations, preference should be given to expanding the stations in order to fine-tune the modelling. Micro-level modelling is required for wind energy assessment because of topographical variations. Further research and analysis is required for evaluating the whole and micro-level potential of the wind. Special provisions should be made for the acquisition of land for electricity projects, transmission lines and substations.

Smart meter and grid concepts should be implemented gradually. The Alternative Energy Promotion Centre should prepare a proper subsidy delivery mechanism for wind energy. The government should simplify provisions relating to environmental impact assessment and initial environmental examination for power sale or purchase agreements. The social attitude towards wind technology has to be changed by implementing successful and affordable wind projects involving public engagement. Similarly, the government should invite competitive bids for wind electricity projects. Training and upgrading of the related software is also required. Better performance will be achieved with clear policy frameworks, enforcement of appropriate technical standards, standardised operational metrics and support for finance, stakeholder training and research and development.

Nepal’s hydroelectricity system is dominated by run-of-the-river power plants where only one-third of their installed capacity can be produced during the winter or dry season. An energy mix for Nepal’s power system is essential to generate sufficient energy, and through ongoing technological advancements, wind energy will continue its drive for lower costs, improved capacity factors, and higher grid penetration.