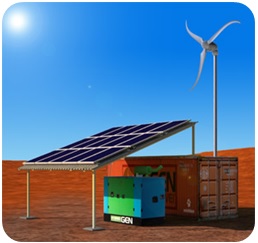 Word ‘hybrid’ is defined as a combination of two elements that produce a same or complementary results. In a rapidly advancing technological world we live in today, it is a strategic merger in order to achieve more effective solutions. In case of energy sector, hybrid systems have made significant innovative progressions over the past few decades.

Diesel generator sets are usually used to provide electricity in remote areas with secluded grids. As this method of energy generation is very expensive, we have to turn to alternate solutions. The answer could very well be blowing in the wind. One of the most widely knowledgeable concerns with wind energy is its sporadic nature which is primarily influenced by geographical diversity. It is for this reason that wind hybrid power systems exist and have been utilized worldwide for years. Wind-Diesel hybrid (WDH) systems are fascinating alternatives for self-reliant power supply for remote locations or areas not connected to the public power grid. If the wind conditions are favourable, these systems allow provision of electricity at considerably lowered costs. Could this be implemented in Nepal, a country where plentiful regions have no transmission lines to bring grid electricity to communities?

WDH power systems generally comprise of diesel generators and wind turbines in conjunction with secondary modules such as control components, energy storage mechanisms, power converters, etc.  Like other renewable energy systems, WDH systems can be either grid-tied- meaning that they draw and feed supply into the electricity grid- or off-grid in which they have no association with the grid at all. In Nepal’s case, and particularly in urban areas, where the public power grid faces regular power-cuts due to load shedding, consumers are gradually resorting to their own power backup solutions.

Like in any other energy systems, a large portion of the system costs are determined by the cost of energy storage, which is usually achieved through use of batteries. Battery-less off-grid WDH power systems can be seen as a solution to establish lower costing power generation units guaranteeing accurate allocation of intermittent wind energy and manageable diesel generation to meet demands of the frequently inconstant load. These systems have their own set of advantages as they involve fewer components, function at higher efficiencies, and are significantly less expensive than battery-based systems. A battery-less system for example, would not require batteries, a charge controller, interconnecting cabling from battery to inverter, and enclosures for battery banks. With the omission of a battery bank in the system, the AC wiring is also simplified, in that no critical load subpanel or inverter bypass switch need be installed.

The diesel generator set in the off-grid battery-less system would essentially replace the electricity grid in the sense that it would be the majority power supply into the overall system. The setup of such a system is by no means that straightforward. Special ‘grid-tie’ inverters may be required in order to allow electricity flow from the turbine. This type of inverter converts direct current (DC) electricity into alternating current (AC) with the additional capability to synchronize the current to interface with a utility line. Grid-tie inverters allow home owners to use an alternative power generation system be it solar or wind, without extensive rewiring and more importantly, without batteries. If the alternative power being produced is insufficient, the difference will be attained from the diesel generator. This smart feature in these systems would reduce fuel consumption and dependence from using solely diesel-based electricity generation methods.

Wind-Diesel penetration is a critical design factor that helps to define the level of system complexity. Average penetration is the ratio of wind energy produced (kWh) to primary energy demand (kWh). This is commonly calculated on a monthly or annual basis and is intended to find information on the loading on the diesel engines and losses or efficiencies in the overall system. There are three different penetration classes which should be measured individually due to their specific operating characteristics. These classes are low penetration, medium penetration, and high penetration systems and each have unique operating features.

Concerning low penetration systems, wind acts as a negative load in that very little regulation or incorporation of energy from the turbines into the power system is required. The diesel generator(s) runs full-time with wind power reducing net load on the diesel power generation. The annual penetration in these systems is below 20%. Diesel engines deliver all frequency, voltage, and reactive power control requirements in low penetration systems. An example of such system is present in Coqaique, Chile with a large regional distribution system consisting of three 660kW wind turbines operating in conjunction with 4.6MW of mixed hydropower generation and 16.9MW of diesel generation.

Medium penetration systems incorporate wind energy components as a major part of the power system but the diesel engines are still majority providers of the power control. The diesel generator(s) runs full-time but at high wind power levels and secondary loads are transmitted to guarantee adequate diesel loading, or else wind power generation is reduced. During these high peak wind periods, primary diesel generators run at low loading and if there are secondary diesel generators present, they may shut off. Annual average penetration is between 20% – 50% in these systems. Such a system exists in San Clemente Island, California where a diesel powered grid is present with 775kW of power generated from the wind.

High penetration systems consist of completely integrated power systems with advanced ‘smart’ control. Diesel generator(s) completely shut down during high wind availability periods when they are not required to supply the system with power. There is limited operational control of the system by staff due to the integrated power with advanced control systems. Fuel consumption is greatly reduced due to the majority of power supply coming from the wind. The system controller constantly monitors the power system and there is a very technology dependent system architecture present contributing to a ‘smart’ hybrid power generation system. Conventionally, fail safe operation strategies are incorporated such that if there is a chance of wind component failure, the diesel engines are able to provide power. An example of this class of system exists is in St. Paul, Alaska, USA where one 225kW wind turbine has been used to operate in many cases with all diesel generators turned off.

The configuration and component size of hybrid power systems depend heavily on the load and resource available at site. WDH systems require generators that can be turned on with short notice as they are integral components in the overall system. Wind turbines for such hybrid systems can range in size from 300W to 750kW. Apart from these primary components in the system, other active power control mechanisms are also normally included. These components allow active control of the isolated grid stability and access to minor amounts of immediate power. Flywheels providing short term energy storage while smoothing out the fluctuations in the wind and load are used alongside low load diesel engines allowing operation to below 10% rated power while sustaining regulation over voltage and frequency.

System controllers are the main link between the two energy generating components, the wind turbines and the diesel generator. These operate at very high speeds to monitor system stability accurately and increases overall system performance. Monitoring and remote access mechanisms are also commonly built into the system to allow users an oversight of the system performance enabling real-time system troubleshooting in order to reduce maintenance and downtime.

The successful implementation of such systems must be carried out with the support of communities and as part of energy education/efficiency campaigns. Not only does the cost of imported fuels have to be considered, but also the transportation, maintenance, and potential environmental impacts such systems bear. In the case of Nepal, social sustainability issues will dominate technical ones and only once this is realised and acted upon, the introduction of such hybrid power systems using local renewable resources to reduce dependency on imported fuels for rural/off-grid electricity generation will be seen. The implementation of WDH systems in Nepal will significantly lower the overall diesel consumption for electricity generation. It is our responsibility to really consider these systems as a possible alternative and only through gradually eliminating the dependency on fuels such as diesel can we dream of a cleaner and greener future.