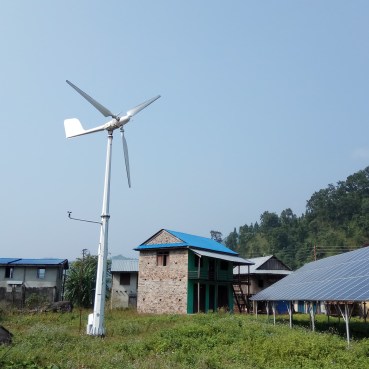 In Nepal, around 35% of the population still do not have access to grid electricity. And due to the tough mountainous terrain, it is technically and economically challenging to lay conventional on-grid electricity system in every corner of the country. Hence, micro-grids could be the only viable option for these remote and isolated communities.

Micro-grids are discrete, localized energy grid systems, having independent energy sources, load demand management, storage unit and distribution, capable of operating autonomously as well as in synchronous conjunction with an area’s centralized electrical grid. A micro-grid design depends on the size, technology, demand, resource availability, social context, and quality and quantity of the service required in an area. Adequately financed micro-grids based on renewable energy resources can overcome many of the challenges faced by the rural communities, and supersede traditional lighting and electrification strategies; driving a community to become self-sufficient.

Due to advancement in technology, micro-grids have become more reliable and are on par with grid quality electricity. Micro-grids provide people with high quality, grid-comparable electricity to operate productive end use (PEU) loads that help local microenterprises generate revenue. Renewable energy based micro-grids also provides a cost-effective substitute to the commercial consumers who rely heavily on diesel generators. It has been accessed that cost of no electricity is about Rs. 40/KWh thus forcing commercial sectors of rural areas to run diesel generators to fulfill their energy demands. The local people of rural parts of the country fully recognize the economic prospects carried by renewable micro-grid projects.

Government of Nepal has been supporting rural micro-grids through its Alternative Energy Promotion Centre (AEPC). Up until recently, they were only promoting community led projects and only focused on micro-hydros. And these microhydros would become defunct once the national grid reached there. But now they are opening up to concept of private sector led projects, i.e. Energy Service Company (ESCO) model; accepting other technologies like solar and wind energy; and moreover, the system specifications are designed to be grid compatible so that the power plant could be connected to the national grid, if needed. As per the latest Renewable Energy Subsidy Program 2073, AEPC now provides 60% subsidy for up to 100kW rural micro-grid projects- either from micro-hydro, solar or wind. They also have special provision for projects between 100 to 1000kW, for which it has partnered with the World Bank and Asian Development Bank. Hence, in terms of policy, the country has officially opened up for private sector led micro-grid projects. However, there are still many challenges to attract the private sector into micro-grid business.

Biggest concern for private sector is the security of its investment, followed by the return on its investment compare to other alternative investment opportunities. Though Nepal ranks second, only behind India among 11 other developing nations, in terms of readiness for energy access investment, according to one World Bank SE4All report, many private sectors would still be reluctant to invest in rural micro-grid projects in Nepal. Even with 60% subsidy, the internal rate of return on equity (Equity IRR) of a rural microgrid is merely around 10%, if we were to invest 20% equity and rest 20% as a debt at 10% interest rate, and keep the electricity tariff at Nepal Electricity Authority (NEA) rate. The return from micro-grid is less than half than that from an on-grid hydro project, whose expected equity IRR would be more than 17% on average. Furthermore, as the client in micro-grid are usually communities living below the poverty line, the perceived risk of payment default is higher, which could make the debtors and developers equally wary. While on-grid project provides legally binding power purchase agreement between the developer and the power off-taker- Nepal Electricity Authority. And since NEA is a government entity, their odds of defaulting is considered relatively less, such that the Banks are providing debts based on project financing, i.e. without extra collaterals or personal guarantee.

Experiences from community led micro-grid show that there are lots of operation and maintenance related issues due to lack of technical human resources in the community, which could eventually lead into shut down of the power plant. Hence, it is better to promote ESCOs, to run the micro-grids, which has been proven successful in India and Africa. However, it would be very challenging to promote ESCOs under current scenario, as the return on investment from a microgrid can be perceived too low compare to the risk involved. Hence, there need to be more incentives to attract private developers into the microgrid business. Providing low interest rate on loan; collateral free debt finance; exemption on taxes and import duties on equipment needed in a microgrid project are some such incentives that could help to level the playing field.

In conclusion, it is about time for Nepal to promote private sector led micro-grids as a long run source of electricity in area those not reached out by the national grids. The government should subsidize renewable projects to a greater extent; at least for the time being to attract developers and financing institutions. NEA should not resist incorporating micro-grids with the major national level grids and give the former equal chance to be in the black. In a nutshell, decentralized electricity supply system, primarily centered towards PEU load, not only creates a better return value for project developers but sequentially also increases the socio-economical potential of rural areas.